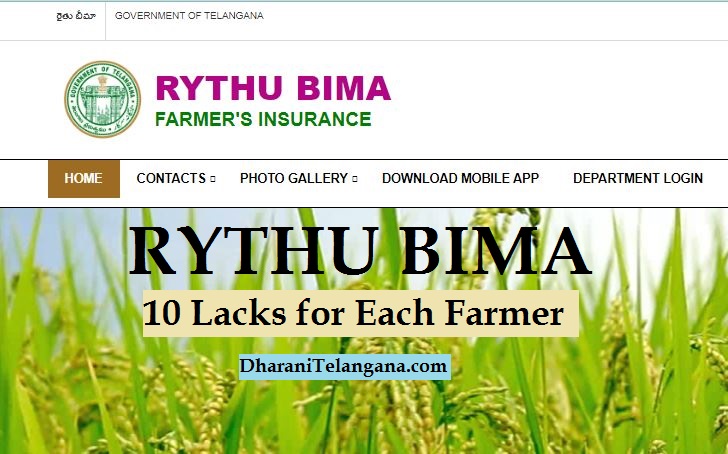 Telangana government issued Rythu bima scheme for increase investment capacity of the famers, resulting in lower levels of income and social security to the farmers. Provides much needed support form government, majority of the farmers are small, marginal and resource poor, dependent solely on farming for their livelihood, This Rythu bheema scheme helpful for small marginal farmers. In telangana most number of farmers are belongs to mid range scale, small marginal farmers only. Keeping this in view, telangana government order to ensure the economic and social security to the telangana farmers, the Government of Telangana has conceptualized and implementing an innovative scheme named as Farmers Group Life Insurance Scheme (Rythu Bima) with affialted with LIC Life insurance corporation. in addition to other initiatives in agriculture sector. Helpful for needy peope this rythu bima scheme is first of its kind and unique in the country as it is implemented based on farmer-wise online land data base through Information Technology and Online Portals and MIS that are being used by all the outreach officers for effective and efficient implementation services. For this services govt. received amazing response from all other states.

Telangana Rythu bima main objective of the Farmers Group Life Insurance Scheme (Rythu Bima), is to provide financial relief and social security to the family members/ dependents, in case of loss of farmer’s life due to any reason. Financial support for farmers family always welcomes, much needed scheme in india. In the event of the loss of the farmer life, their families are facing severe financial problems even for their day-to-day needs. As per records, yearly 12,000 members died. The farmers Group Life Insurance Scheme ensures financial security and relief to the bereaved members of the farmer’s family.  Reason of death whatever for Farmers, in the age group of 18 to 59 years are eligible for enroll under the scheme. The entire premium is paid by the government to the Life Insurance Corporation of India.

Telangana government takes extra measurement to prevent duplicates, illegal scams on name of Rythy Policy in villages. In the event of the death of the enrolled farmer due to any cause including natural death, the insured amount of 5.00 Lakhs INR (Approx. USD 6928) is deposited into the designated nominee account within (10) days. In application form, everything explained with detailed structure. Rythu bhima scheme has a tremendous impact on the lives of the bereaved families and helping their livelihoods, since most of them are resource poor small farmers and belong to weaker sections of the society. For this scheme implementation programs government authorizes working on stckrit base. Rythu bima scheme has been implemented through the Information Technology with development of Online Portals and MIS developed by National Informatics Centre (NIC). Telangana government adapted this scheme from YSR Rythu barosa scheme. Many farmers are uneducated, not all. But in generalize majority of farmers in villages, they are not aware about government proceddings. In view of uneducated farmers, The scheme introducing is that, the nominee/farmer is not required to approach any office for the settlement of claim amount. The outreach officers at village level collects data from revenue department in the event of loss of life of any farmer and submitted to the LIC on behalf of designated nominee of the farmer. The claimed amount would be transferred through RTGS into nominees account. Fully detailed structure procedding done by village secretary, revenue department officers

When the crop yield is less than the guaranteed yield of notified crops,
the claim payment equal to shortfall in yield is payable to all insured
farmers.

The Telangana Government has started Rythu Bima Scheme to guarantee the monetary and standardized savings to the farmers. Financial support for small, mid scale range farmers. TS Rythu Bheema Scheme has been conceptualized and executed as an innovative plan named as Farmers Group Life Insurance Scheme along with different activities in agribusiness segment. Intrested candidate can know all details offline, by enquiry village secretary, revenue officer in near by government office. Telangana Rythu Bandhu Life Insurance Bonds Scheme is first of its sort and one of a kind in the nation as it is implemented based on farmer-wise online land data base through Information Technology and Online Portals and MIS that are being used by all the outreach officers for effective and efficient implementation. 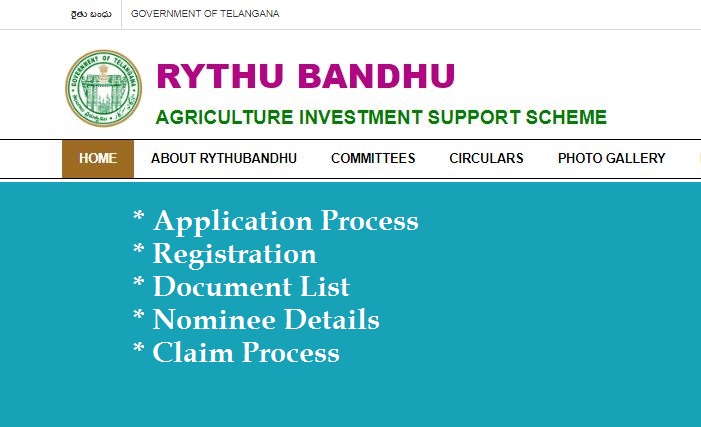 Telangana Rythu Bima Scheme 2022 – 2023 is a Farmers Group Life Insurance in which the state government. This scheme will provide the insured amount of Rs. 5 lakh would be directly deposited into the designated nominee account within 10 days in case of death of the enrolled farmer due to any cause including natural death.

Telangana Rythu Bheema Pathakam Scheme application status check online here provided procedure for checking. All the applicants can now check TS Rythu Bheema Pathakam Application Status for the insurance money while visiting the LIC Bank once in a while till your claim has not been settled by the concerned authorities. Claim amount will released after document verification done. LIC concerned authorities mentioned that the insurance claim will be settled as soon as possible after the death of the farmer due to common reasons. Application status can check online through Rythu bima official web portal.

The Government of Telangana state has conceptualized and executed an innovative plan in order to guarantee monetary and standardized savings to all the farmers. Support for Telangana government from all basic range farmers. Insurance bond, scheme wise, economical range wise insurance bond. It is termed as Farmers Group Life Insurance Scheme or the Rythu Bheema.

Telangana Rythu bima scheme contains several activities in the agribusiness segment. This Farmers insurance plan is the first of its sort. As it is stand-out in the entire country and is really subject to farmer and it purely online digital web-based land data base through the Information Technology and Online Portals alongside MIS. All the work authorities are using this for practical and viable execution. Revenue officers, district panchayat officers, local village secretary track record status. One can easily check their application status for the insurance money. Registration to claims process fully digitalized and everything will appeared online. Anyone can check online by their registration number, insurance policy number and date of birth. For this application process, PAN Card, Aadhar card, Income certificate is mandatory documents.

For any other issues, They need to visit the LIC Bank every once in a while till the concerned authorities have not settled their form. The LIC concerned authorities have said that the Insurance claim will be settled immediately after the death of the farmer due to many common reasons. Rythu Bheema scheme contact information, District wise, thaluka wise, division wise available here. Rythu Bheema (Bhima, Bima) Scheme Pathakam in Telangana 2021 Eligibility Criteria Application form process Free insurance Farmers Download Claim Form Contact information provided here.

Telangana government Farmers LIC Policy is interested one. Its combined application along with LIC Life insurance scheme, It has launched Rythu Bandhu Life Insurance Bonds Scheme for farmers. Under this scheme, govt. will provide Rs. 5 lakh insurance to farmer family. All the families of farmers covered under Rythu Bandhu Scheme will get this amount irrespective of whether the death is natural or accidental. Farmers Group Life Insurance Scheme for Telangana state. Under this, the government will provide an insured amount of Rs. 5.00 Lakhs. The amount will be directly deposited into the bank account of the designated nominee within 10 days. The scheme is liable only in case of the death of the enrolled farmer due to any reason including natural death.

The main objective of Telangana Rythu Bandhu Pathakam is to make available the advance to the needy farmers against pledge of stock so as  to prevent them from resorting to distress sale of their products particularly during glut and giving them temporary financial support in terms of need. The scheme is being implemented by all the AMCs in the State.

After bifurcation, the Telangana Government has enhanced Loan Amount from Rs. 1,00,000/- to Rs. 2,00,000/- under Rythu Bandu Pathakam (Pledge loan scheme to prevent farmers from distress sales) without interest up to 180 days.

Under this Telangana Farmers LIC insurance scheme, Telangana state government decided to offer an insurance of 5 lakhs to the poor farmers. it transferred the money to the account of the insured farmer within 24 hours. All the farmers between the age group of 18 to 60 years can avail benefits of Rythu Bandhu Life Insurance Bond Scheme. This Life Insurance Scheme will benefit around 28 lakh (2.8 million) farmers out of the total 5.8 million farmers.