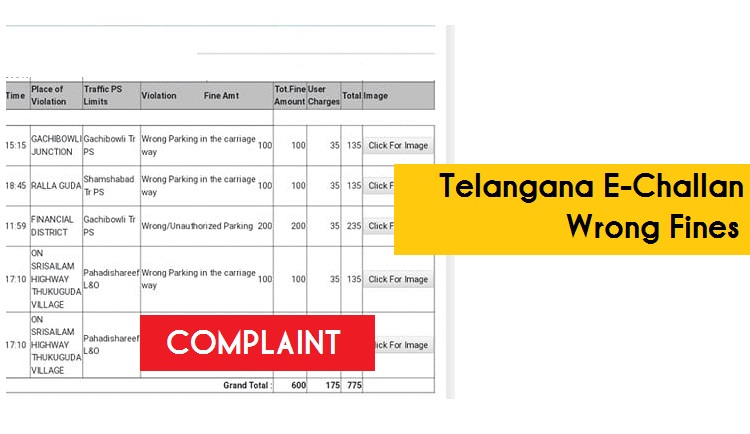 Wrong Traffic Challans, Mistakes while entering Vehicle number, enrolling with duplicate number plate ids. The chances of wrong person getting penalized are certainly less. Sometimes due to some minor issues, mistakes do happen possibly, Traffic police zeroing on the wrong person by overlooking. Many of fake traffic challan made with main reason was, Someone, using same registration number to his vehicle. Its considered a Duplicate number. But it shows traffic fine on original candidates’ names only.

My vehicle no ts10****** got challan dt 8/5/2021 for not wearing a helmet but this is not my vehicle maybe this is wrong no or someone using my duplicate no in pictures the no is not clear I am Sardar Ji and helmet is exempted for us please check who is using our vehicle no.

My vehicle no ********* was issued a wrong challan 3 january 20 at LB nagar dilsukhnagar road. On the bike two members are there. But the challan came as triple riding. So plz rectify the issue sir.

Dear sir,
My vehicle no AP******* was issued wrong challan on 09-OCT-2021 at 09 hrs. Vehicle No AP09CW7988 involved in traffic violation,fine imposed Rs 135 for Without Mirror/Improper use of rear view mirrors on 09-Oct-2021 : 09:09 Hrs at OP DARGA,Madhapur Tr PS limits. Currently my vehicle in my hometown not using my 2 wheeler.Kindly rectify the issue and cancel my challan.

Dear sir my vehicle no TS13ER1399 wrongly challan to me. Actually, the challan vehicle image shows TS12ER1399 pl i request clear pending challan. Similarly, for Ehsan Sultan, a resident of Attapur, was imposed with an e-challan for his vehicle with registration no TS13 EK 4571 for riding without a helmet, but the photo attached with the challan had a different bike, “The cops imposed me a challan for riding without a helmet but in the photo the number plate is unclear and the bike was different how did the cops figure out that the vehicle is mine,” he asks.