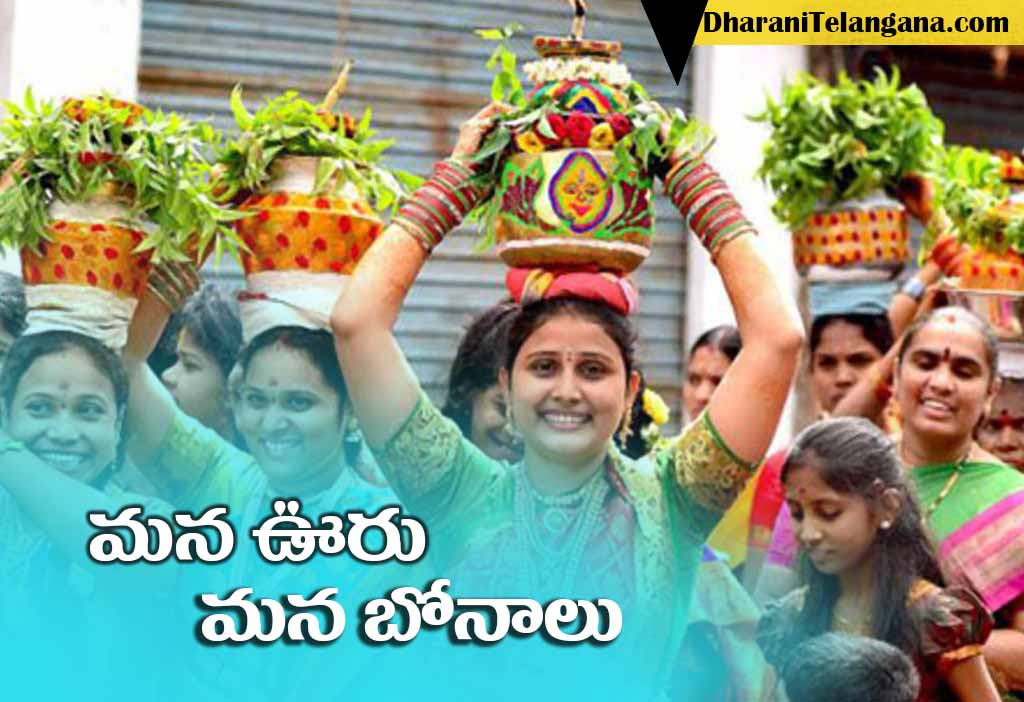 Telangana Bonalu Festival dates Schedule Place area wise dates. Bonalu Festival begings with lots positivity. Ashada bonalu begins from 4th august. Bonalu special festival is celebrated during Ashada Masam, which falls in July/August. This year, the month-long festival and Special poojas are performed on the first and last day of the festival. Bonalu is considered to be a form of thanksgiving to Goddess Kali. The Amazing festival will begin with the presentation of bonam to Golconda Jagadambika goddess temple. part of the festivities a procession will take place from Langarhouz to Golconda. many authorities and local candidates will present the silk robes, bangles to the goddess.

The government of telangana has decided to hold the bonalu festival grand manner. celebration grandly this year were halted last year due to the coronavirus outbreak. For the celebration, authorities have also made arrangements to that extend. Secunderabad Ujjain mahankali ammavari Bonalu would be held on 25th and 26th, Old city lal darwaza Mahankali ammavari bonalu will be held on August 1 and 2nd the festival will end on august 8th in Golconda. Cheif minister KCR Wished ” With the blessings from the Mother Goddess and the state government’s determination, the Telangana State became Annapurna (who offers food) to the entire country. 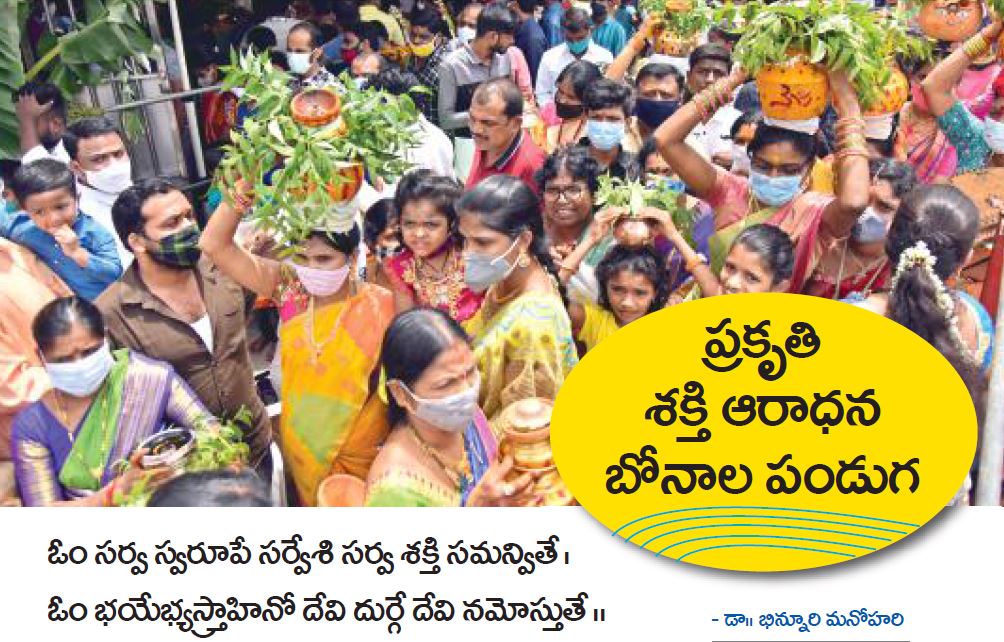 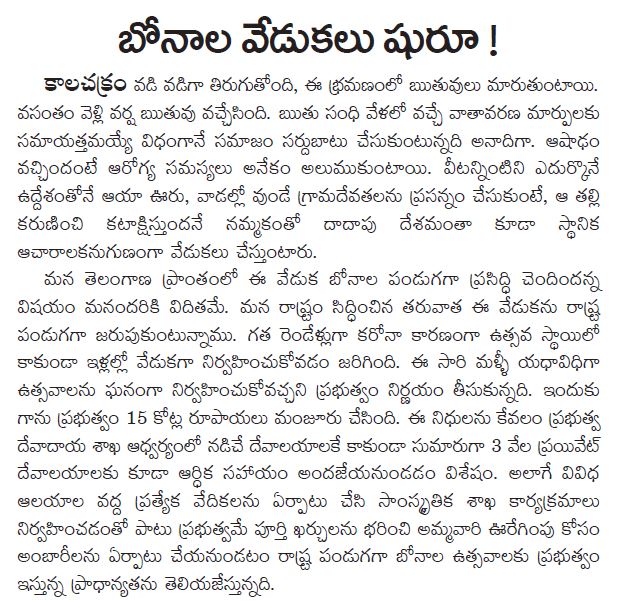 Bonalu is celebrated in different parts of Hyderabad on every sunday of Ashada masam. tate government could not celebrate the Bonalu festival on the grand scale in the last two years due to Corona pandemic and it was celebrated a low key affair. This time, the State government has decided to celebrate the festival in a big way. for the celebrations 15 crores have been sanctioned by the government for the celebration of bonalu festival and financial assistance would be extended upto 3000 temples. including private temples across the city for the Bonalu festival, and added that the silk sarees will be presented to 26 Endowment temples during the festival.

Devotees in large numbers observe this festival by worshiping Goddess Mahakali, who they believe will protect her followers from any seasonal diseases, which are common during the monsoon season. For the unversed, Bonam means meal or feast in Telugu, and signifies an offering to the Goddess. It shows the importance of food in the festivities, as special dishes are prepared in honour of the Goddess Mahakali. 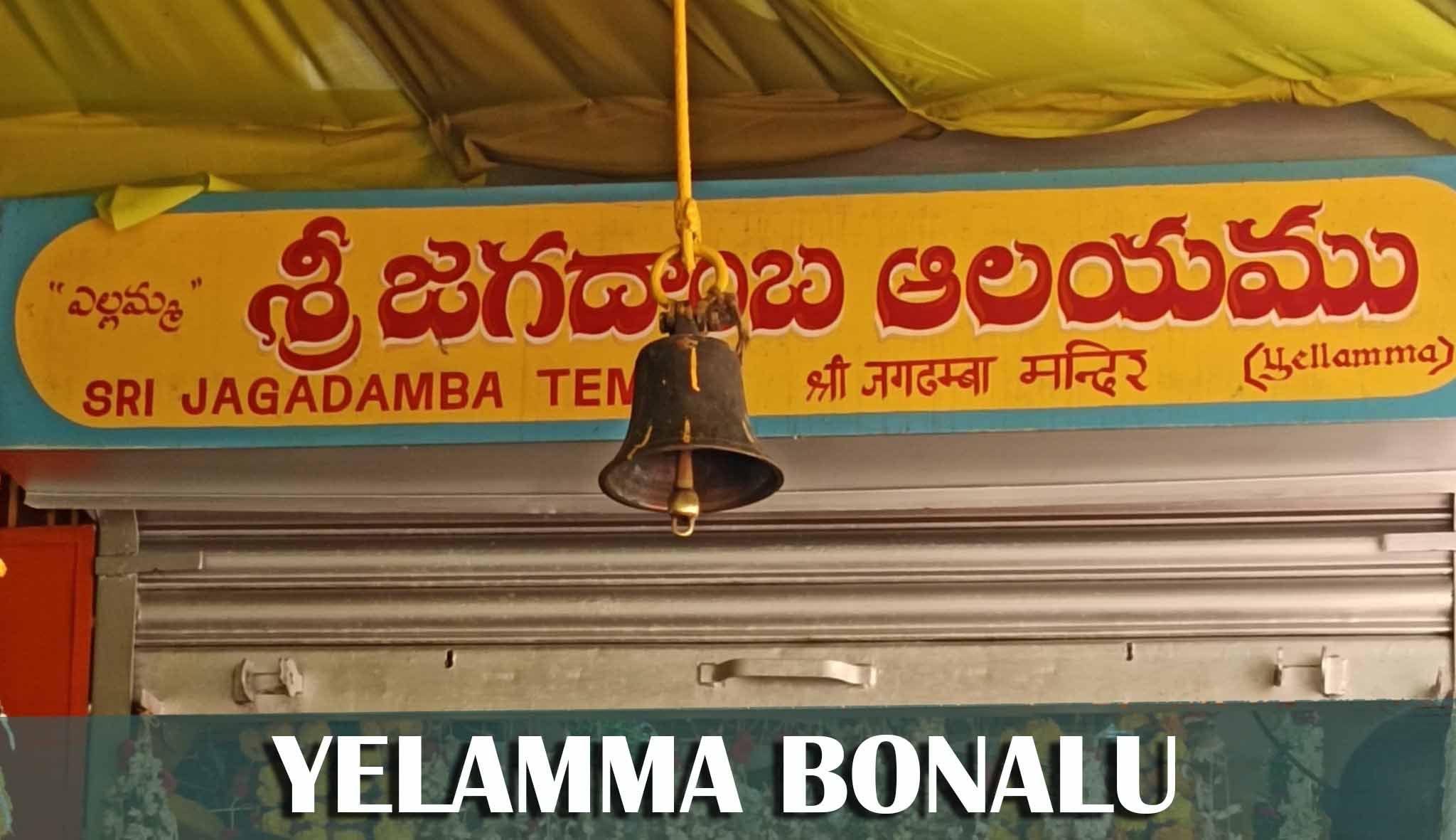 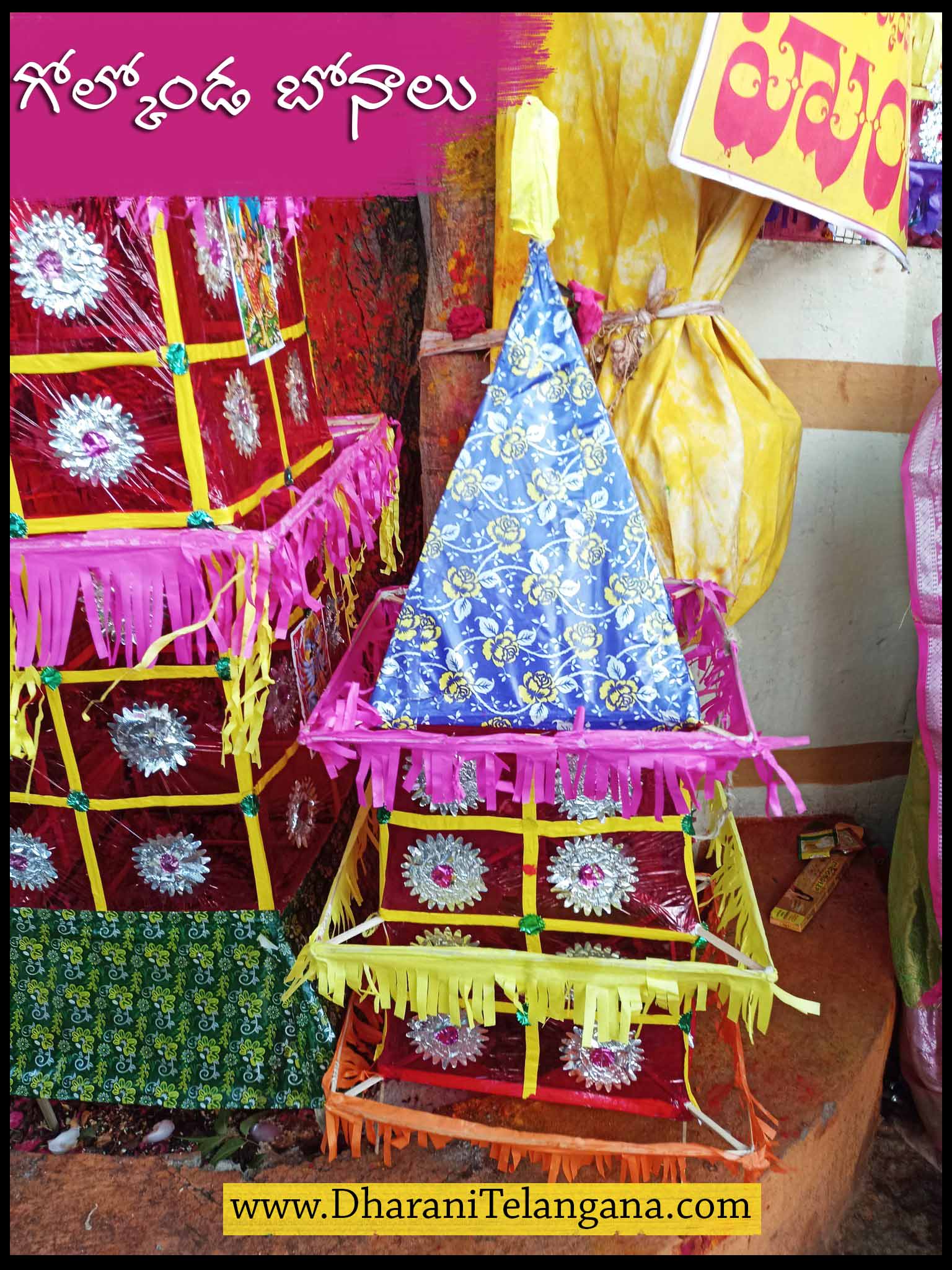 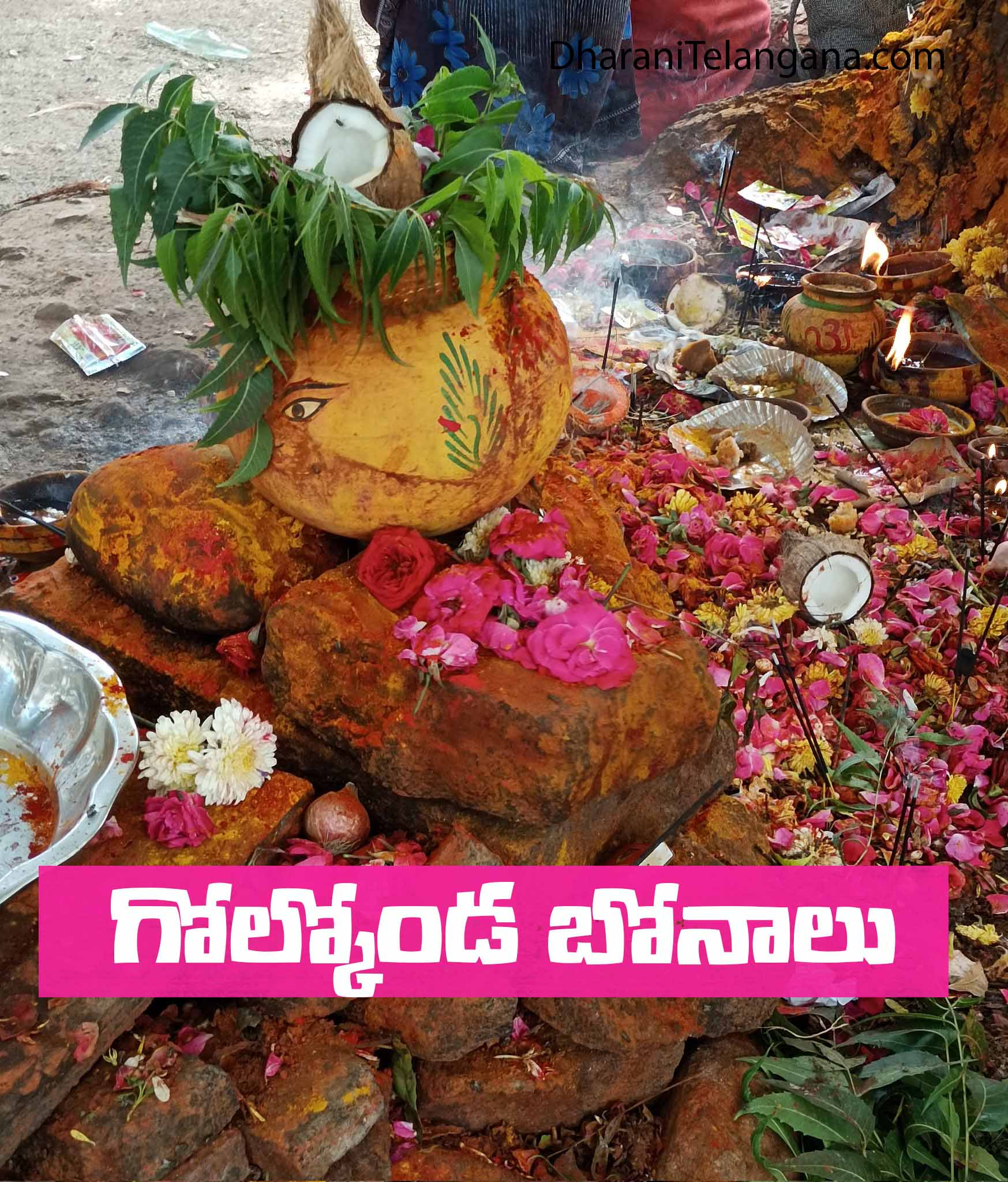 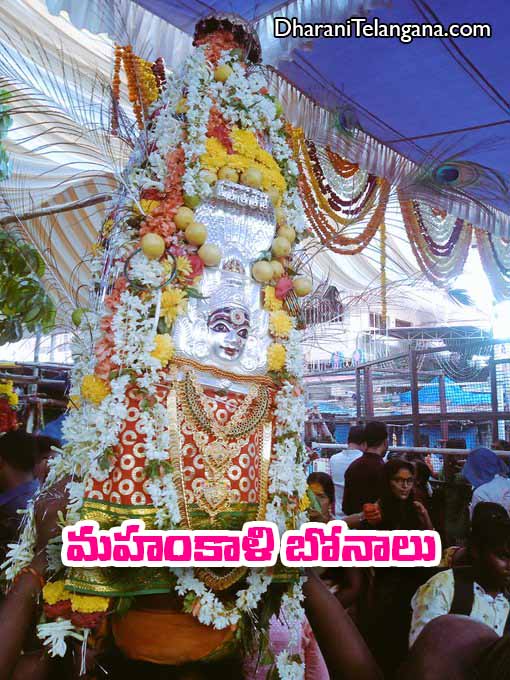 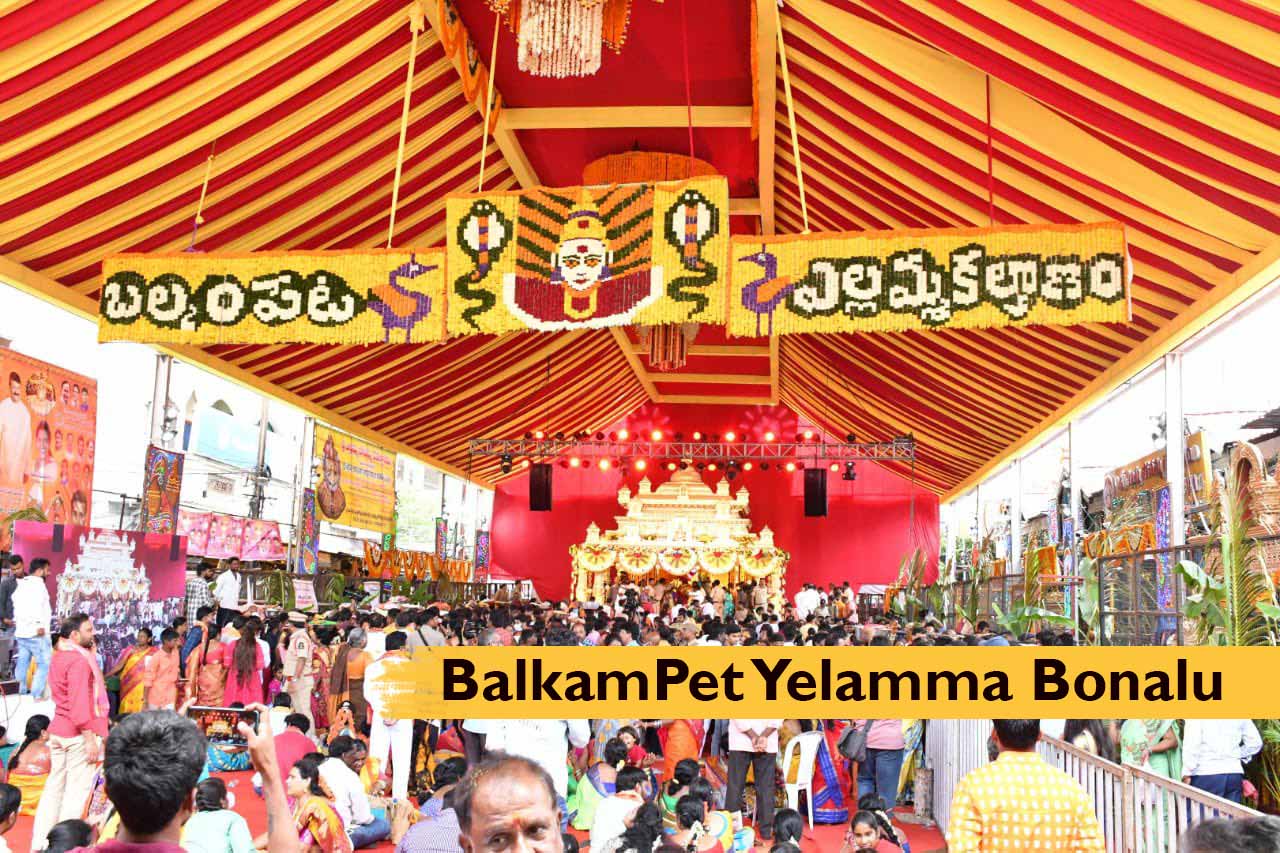 Hyderabad Bonalu festival dates back to the 19th century, The festival reportedly dates back way back to 1813, when plague had spread in the cities of Hyderabad and Secunderabad. history when the twin cities of Hyderabad and Secunderabad experienced the outbreak of a deadly plague in 19th century times. due to plague disease thousands of people dead, injuried, a military battalion from the state, which was deployed in Ujjain, prayed to Goddess Mahakaali to clam situitions. if everything under control, promised to build a temple in Secunderabad to the deity if the plague ended. When the plague finally stopped, they devoted themselves to the goddess and built a temple as promised. To please the goddess mahankali, they offered Bonam, which later became an annual tradition. celebrating every year with bonam. Bonalu involves the worship of Goddess Kali in various forms, including Mysamma, Dokkalamma, Pedamma, Pochamma, Yellamma, Poleramma, Ankalamma, among others. Preparing rice, cooked with milk and jaggery in brass pot, decorated with neem leaves, turmeric and vermillion. Bonalu is celebrated all over city with traditional attair sarees and bangles.